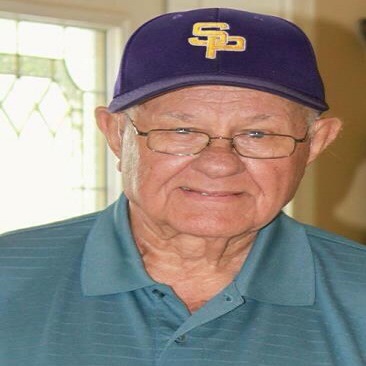 He quietly keeps guard over the school from his desk in the echoing central hall.  Gene Michinski is the gatekeeper…the first person you see every morning when you walk in and a look from him lets students, teachers and visitors alike know if they are in trouble or not.  He’s been a part of the Prep family since 1965 and at the front desk for the past 18 years.  In his time here, Gene has seen the Jesuits live in the school and worked with many of the school presidents. “With Father Lamm you’d ask him if something was satisfactory and he’d say ‘when it’s not, I’ll tell you.’”  But Scranton Prep is just one chapter in Gene’s story.

Born in Scranton, Gene graduated from Scranton Tech in the 1940s and was already well into his chosen profession. “I started peddling newspapers at age 8, then became a copyboy for the Scranton Tribune.  Newspapers got in my blood.”  But service called first.  Enlisting in the military during the Korean War, Gene spent 6 years in the National Guard and 1 year active duty in Augsburg, Germany as a Supply Sergeant.  And when he returned to the states he met the love of his life, Mary.  “I met her on the dance floor in a bar with a back room that was also a restaurant.  But you should probably say it was a restaurant.  It sounds better,” he says with a twinkle in his eye.  That first night they danced to Goodnight Irene and the rest was history.  They married two years later and one week after they said “I do”, Gene and Mary drove to Toledo for his new career as a typesetter for an Ohio newspaper.

Three children followed, Gene, Ed and Christine.  And more newspapers too, including one in Philadelphia.  But eventually the family settled in Scranton where Gene commuted to the Sunday Independent in Wilkes Barre.

From 1955 to 1992 Gene set the stories that made history, both locally and around the world, including the one that left the biggest impact on Gene, the ’72 flood.  “We were the last ones to leave Wilkes Barre that Saturday night.  We were getting ready to put the paper out for Sunday morning so we had to stay.  Our bosses said ‘if you hear the whistle take off.’  Well when that whistle blew we took off.  I was scared.  The Moosic bridge was washed out.  So was the one in Duryea.  They were just building Interstate 81 at the time and it was the only road out of town.  It was just gravel.  No pavement.  But that’s how I got out of town.”    The flood devastated the area but despite the devastation the newspaper carried on.  “We published our first edition after the flood using the Scranton Times equipment because ours was covered in mud.  It took a while but we cleaned everything up ourselves.”

And then one day, Gene came to Prep.  It wasn’t really a plan to spend 50 plus years at Scranton Prep.  He was helping out his wife’s uncle, the first building manager, as he made repairs around the building in the early 60s.  “I’d come over and help.  Then I started taking tickets for basketball and wrestling.  And when I retired in 1992 from newspapers, I started at Prep full time.”

“Prep grew on me.  Hanging around and working here.  It became part of me,” shares Gene.  “I remember when the Jesuits lived here.  And I knew Father Keller when he was a mister.”  In addition to helping his family at the building, Gene became the equipment manager for the team sports before accepting his current position.  “I remember getting knocked over on the football field once.  25 years on the sideline and I never got knocked until one day, repairing a helmet and returning it to a player on the line of scrimmage a player knocked me over.  And I got right up and kept on working.”  Nothing stops Gene.

Gene is a part of Prep and we’ve been lucky to be part of Gene’s family for the past 50 years.  And just as you do when you meet someone who has seen so much more and knows so much more than you do, we asked for his advice for all students, past and present.  “I hope Prep can live on.  I’m part of Prep and I don’t want to see Prep ever die.  And I hope you take away from here the values that you inherited here at Prep.”