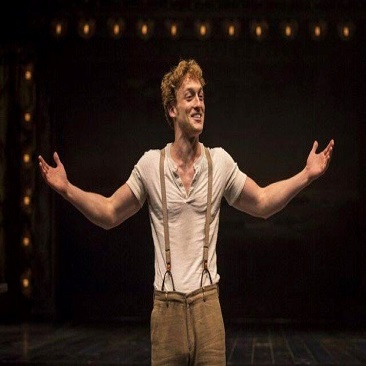 “Prep was one of the most influential decision of my life.  I don’t know if I’d be doing what I do without Prep.”  Based in Chicago, Luigi Sottile, class of 2002, is making a big impact on stage and screen.  And it all began because one special Prep teacher saw something in him that he didn’t even see in himself.

“It was expected that I would go to Prep.  I didn’t want to go originally.”  Having gone to St. Patrick’s Elementary School (now All Saints Academy), Luigi had a tough transition into Scranton Prep.  “A lot of people came in bulk with their friends.  I came with only a small handful.”  But things got better, slowly.  Activities like baseball helped.  Then one day, Ann Moyles changed Luigi’s life.  “I was mostly an athlete and she heard that I could sing.  She wanted me to audition for that year’s musical and I adamantly said no but she didn’t give up.  She knew I wanted to be a filmmaker one day and asked how I could direct actors if I didn’t know how to act.”  And that was that.  Cinderella, Fantastiks, Footloose, Luigi found he liked being on the Prep stage even more than being at bat.  “I think having an athletic background helps you transition more easily into acting, it teaches you how to be grounded in your body, being part of a team and most importantly how to fail.”  He continued with his new passion in college.  “I almost quit acting sophomore year in college due to a failed audition.  I almost quit the whole thing but I pushed on.” Since then it’s been almost nonstop work.

These days Luigi is keeping busy with a wide range of roles all over the country from Chicago Shakespeare Theatre and Steppenwolf Theatre Company in Chicago to the Folger Theatre in DC and the Walnut Street Theatre in Philadelphia, to name only a few.  He also recently had a part on a hit NBC show (hint, hint…the name Chicago is in the title) and filmed his first pilot in NYC for YouTube Red.  “Flawed people are my favorite people to portray.  I love to help make an audience understand how complex people can be and hopefully to find parts of themselves in my characters.”  And when he has time off, which is not very often, he tries to makes time for his hometown friends and family.  “My friends from Prep ground me.  They know where I come from and they don’t let me forget it,” he says with a smile.   “Prep taught me so much…to have an open mind; an open heart.  Ann Moyles and Kathy Elgaway introduced me to a wider world through theatre.”

And as for how Mrs. Moyles, his mentor, would feel about his success?  “She’d be over the moon.”  We couldn’t agree more.